The owner of Sur Hotel gave me a tip on where I could see some nice sand dunes without having to rent a 4×4 car or staying at an expensive desert camp. He told me that I should drive to Al Wasil, keep driving south through the small town until I reach the only paved road that comes out of the south side of town. This road goes into the desert and stops being paved 2km away from a desert camp. I could park my car where the pavement ends and climb one of the dunes around.

It took me about 2 hours to drive there from Sur. I had a big smile on my face as I approached the sand dunes. I had seen smaller ones in the past, but never ones of this magnitude. Sharqiya Sands is almost 180 km from north to south, and 80 km from east to west. The dunes I visited were located at the northern tip of this vast desert. I arrived at the end of the paved road at around 4:30pm. There were no other cars parked there. In fact, I didn’t see any other tourists during the area the entire time I was there.

As I was getting my photography gear ready inside my car, a local kid knocked on my door and scared the shit out of me. I waved and said hi to him, but we couldn’t communicate since he spoke no English at all. He was very happy to see me though.

It was a cloudy day and the heat wasn’t scorching, which make climbing the big dunes an easier task. The wind would blow from time to time, creating these beautiful visual effects on the sand.

I had almost an hour there until sunset, and I really enjoyed the solitude as I started to do a whole replay of this long trip that started almost two years ago, remembering the people I met, the bus rides I took, the meals I ate, and many other small details that were buried deep in my memory. It was one of those special moments when I really enjoyed the setting and realized how luck I am.

Leaving the place after the sun went own, I told myself that I had to come back to experience this again in the following few days. I did that just two days later, but strong winds would prevent me going up the dunes again.

As a consolation, on the way out of the desert I caught a glimpse of a pack of camels in the distance as they walked through the sand filled winds.

I also made a long drive south to the small port of Shannah. The. It’s about 300 km one-way from Sur, and it took me over seven hours to complete the round trip. The reason for doing it was to experience the paved road that cuts through the Sharqiya Sands, but I ended up a bit disappointed with the views. Except for a short stretch where I could see sand dunes and around me and some Bedu settlements, the rest of the drive was pretty monotonous. 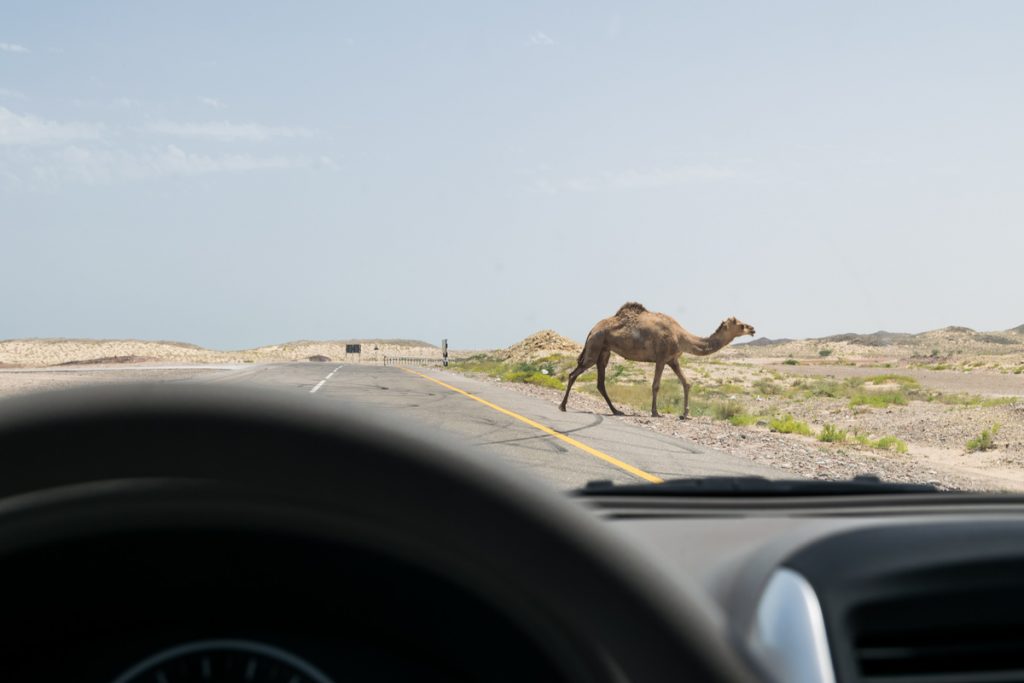 Despite the slightly disappointing drive, experiencing that sunset at the Sharqiya Sands was one of the defining moments of my trip around the world.