We ended the 3-day hike from Kalaw by taking a boat ride from the southern floating farms in Inle Lake to the northern town of Nyaungshwe. The first twenty minutes were spectacular, as we navigated through narrow canals in the floating farms.

During the boat ride, I started to notice the large number of high-class resort hotels on the banks of the lake. After 3 days of hiking through small local villages, this was quite a contrast.

We also saw the famous fishermen who use their legs to paddle while both their hands are busy with fishing nets.

Lastly, we stopped at a large wooden platform, with a swimming area next to it. Local kids looked at us with a lot of curiosity as they said goodbye when we left.

Once in Nyaungshwe, we went out for an evening walk and noticed, in addition to high class hotels, the large number of upscale restaurants. There were also a lot of what looked like older rich tourists. I even saw a sign outside a public toilet that stated that it was free of charge of foreigners, but was 200 kyats (0.15 USD) for locals, which I thought was very messed up. I didn’t know places like these existed in Myanmar. Yangon seemed very raw and more catered to locals and budget backpackers. Same with Kalaw.

The following day, and with the same people we had done the hike with (Yus, Vega, Sebastian, and Romina), we hired a boat for the day to tour around Inle Lake, including a visit to Indein. The cost was a reasonable 18,000 kyats (or 3,000 per person, 2.5 USD). This ended up being more of a shopping trip, a tourist trap. The first stop was at a weaving shop where they gave us a short demo followed by a tour of a big shop full of shirts, scarfs, and accessories. The prices were very expensive by local standards. The same pattern would repeat at the cigar, wood carving, and silversmith places. For lunch we were taken to this nicely decorated but overpriced restaurant. In fact, lots of boats stopped there despite the presence of many other restaurants around the area. I suspected that they paid the highest commission to the boat drivers. The food was average, the portions were small, and the price was the most expensive we had seen in the country. Tip to future travelers who want to do the boat tour around the lake: tell them beforehand that you want to go to a cheap restaurant for lunch, and that you don’t wish to buy anything.

The saving grace for the trip was the visit to Indein Village. The river trip up there was very interesting, going through many narrow canals. The driver was very skilled at steering the boat through these passages that were only a few centimeters wider than the boat. On the way there we went by (but did not stop) at the place with the Padaung women, who have elongated necks from wearing metal rings on them. I could see some of the women from a distance and that was enough for me. It’s an eerie sight, and I don’t know how I feel about paying them just to take pictures as if they were zoo animals.

Indein Village was great, especially the pagodas that had not been restored. The restored ones just looked a little too new and fake for me. When the winds come in, you can hear the wind chimes on the pagodas produce a peaceful sound. 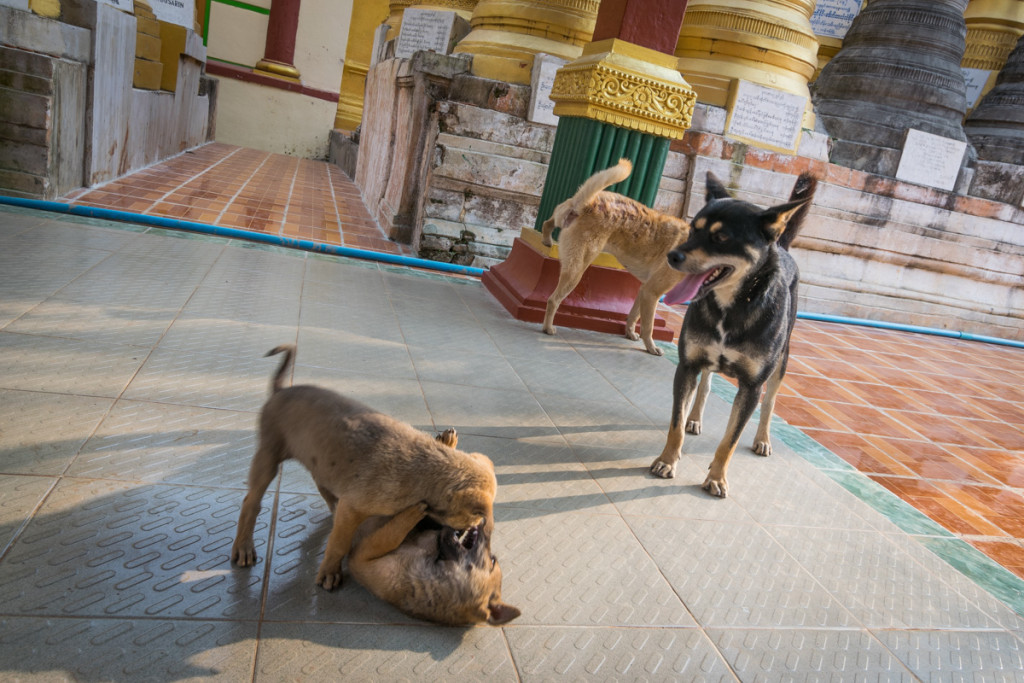 The boat trip back to Nyaungshwe coincided with the sunset, so the lighting was wonderful. The boat driver stopped by one of these fishermen who was more than happy to pose in many positions for us. We gave him a small tip for this efforts, but I wondered if this was also part of the tour to make us spend money.

Posted in Travel, Photography, Round The World Trip, Asia, Myanmar
Leave a comment